On Sunday, 17 January 2016, the date the sanctions on Iran were lifted, National Iranian Tanker Company, (NITC) conducted a well coordinated conference to celebrate, not only the lifting of sanctions but also their 60th founding anniversary.

Ali A Safaei, NITC’s MD & board member, had confidently managed to factor in the lifting of sanctions to perfectly coincide with the date of the conference. It was no coincidence that the event was planned on the same day as the sanctions were lifted. The time difference between Vienna and Tehran had been factored in so that the announcement could be made to the 300 plus attendees, that they were now legally able to conduct business without, any fear of the contravening sanctions.

The refrain from the various Ministers and stakeholders was that the sanctions were unfair and unjust in the first place, as Iran was banned from producing any nuclear weapons by the late Ayatollah Khomeini and the current Ayatollah Khamenei, having repeatedly stated this over the long extended period of negotiations, referred to as Constructive Engagement and officially referred to as Joint Comprehensive Plan of Action (JCPA).

Mohammad Souri, the well regarded previous chairman and MD of NITC, magnanimously gave well deserved praise and a great deal of credit to Safaei for safely navigating NITC through very difficult times, during the imposed sanctions. Souri is currently an Advisor on Strategic Assets, to the Minister of Petroleum, Bijan Namdar Zanganeh.

NITC became a private company in the year 2000. NITC’s shareholders are NIOC’s Pension Fund with 34%, the Government Pension Fund with 33% and Social Security Fund with the remaining 33%. It was mentioned that there is a possibility of some shares being released to the public at some point in time.

Iran’s population is around 80m and apart from having to cater to its own population, it also has access to other regions that surround the Persian Gulf and nearby markets as well. Then, there is the strategic need for the Caspian region to access world markets via the Persian Gulf, which includes Russian interest, hence the opportunities are numerous for all strata’s of commerce and infrastructure development. Hopefully friendly regulations will be put in place to encourage direct foreign investment. Current transshipments that were being handled out of some locations in the Persian Gulf, may find that as Iranian ports are upgraded, a change will take place with cargoes going directly to and from Iranian Ports, rather than the transshipments that have been taking place.

Safaei ‘s presentation with the title, “NITC Outlook & Global Shipping Market” was well prepared and covered many subjects in detail. Back in 1976, NITC established a JV with BP, involving 10 tankers with a deadweight of 1.2m tonnes. Today, NITC possesses the largest combined tanker fleet of 62 tankers with a combined 15.4m dwt. Out of the 62 tankers, 42 are VLCC’s of which five are built 1996. In their suezmax fleet of nine, is one built 1999, with four others hitting the so-called 15 year limit. With the current oil glut these units might serve a strategic purpose functioning as storage tankers, while NITC assess the commercial cost of putting some of them through DD/SS. As usual, in time of high demand some oil majors and traders in need of moving their cargoes have taken units over 15 years of age.

To the relief of a few shipyards, there is however a fleet renewal program on the agenda which will cover not only NITC’s requirements, but also that of IRISL.

NITC has not only support from its shareholders but the Minister of Cooperatives, labour and Social Welfare, Ali Rabiei, stated, that a Chinese Bank had voiced interest in a $5bn investment to expand Iran’s tanker fleet. He also stated that Iran has lined up around $180bn worth of projects ranging from upstream projects, such as exploration and drilling to downstream petrochemical projects.

NITC has some 2,350 Seafarers trained at their own Pars Maritime Training Institute (PMTI) established 30 years ago, as well, as some 565 shore based staff.

Safaei’s presentation also covered global seaborne trade taking into account that in 2015, about 17% of all the products shipped came from crude oil. However, the combine total of all oil & related cargoes came to 33% equating to 10.8bn tonnes.

Approved World Crude Reservoirs from 2014 data available, shows Iran ranked in 4th place with 157.8bn barrels equating to a share of 9.3% out of a total of 1.7trn barrels. Venezuela is in first place with 298.3bn barrels with a 17.5% share, followed by Saudi Arabia with 267bn barrels with 15.7% market share. Canada is in third place with 172.9bn barrels representing a 10.2% share.

Of note in the table below of Approved World Natural Gas Reservoirs, from the same data in the presentation, Iran is on top with 34trn cubic meters represented by 18.2 % out of a total of 187.1trn cubic meters, followed by Russia, Qatar and Turkmenistan with the US in 5th position. 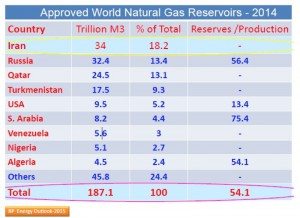 Of interest is that more than 55% of the Approved Oil Reservoirs and 70% of Approved Natural Gas Reservoirs of the world are located in the Persian Gulf and Caspian Sea.

Officials also stated that Iran holds a considerable amount of condensate at sea, which will go on sale immediately after the sanction removal.

The Chinese were present in large numbers. The Chairman of Guangdong JOVO Group, a trader of LNG stated in the local press, that his company wants to establish a joint venture with NITC to produce LNG floating production facilities because the JOVO Group wants to buy the output from the joint project which will secure their LNG procurement needs.

One notable point of interest mentioned was the impending reactivation of the SWIFT system (Society for Worldwide Interbank Financial Telecommunications) to facilitate transfer of funds, which had been denied to Iran. Along with this reactivation, hopefully the need to carry large amounts of cash may not be needed in the future with international credit cards once again coming back into use, hopefully. 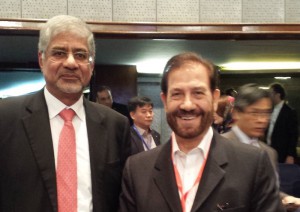